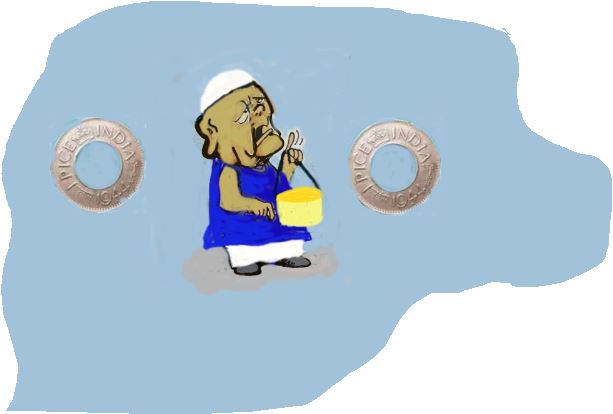 At the time, he was surely the oldest man alive in my world. I mean at the time I knew him. Short of a miracle, he cannot possibly be around anymore now, having renounced his title in favour of other two legged creatures, who, paradoxically enough, have managed to live longer than him. That is, if “number of years lived” were to be treated as a reliable index of living.

I was less than ten perhaps, when he was a regular visitor in the locality we inhabited. The short, toothless, hollow-cheeked, sun-burnt, emaciated old man was a known face. Life expectancy in India has improved significantly since those days and I suspect that this geriatric was no more than forty when he was readying himself for his final journey.

His attire, though not extraordinary, was not exactly ordinary either. It consisted of a homemade poncho of sorts running all the way down to an inch or two below his knees as the rest of his legs lay hidden under a lungi, if I remember correctly. It is unlikely that his clothes had ever been washed. Touched up by dirt collected from various non-discernible sources, their colour could perhaps be described as somewhere between dark brown to grey.

His head was permanently covered by a toupe-style piece of cloth, again of nondescript colour, tied into a knot hanging from the nape of his neck. The top of his head having been doggedly hidden from public view, I cannot be exactly sure of course about the nature of vegetation adorning it. I tend to believe though that he was totally bald and the head cloth was a costume he had devised to make himself presentable to his audience.

He had fierce eyes and a high-pitched voice, which served as the only weapons he possessed to establish his right to exist in a planet which was possibly not too eager to grant him that right. The voice sang out a number or the other from a limited repertoire, as his right hand fingers struck up a beat on a left hand held percussion instrument, the bottom of a used can of Australian cheese that policy makers in India still allowed to be imported in the early years following independence.

I don’t think I would ever commend him for his musical expertise and along with the stray dogs in our vicinity, my friends and I had accepted him as a necessary adjunct to our lives. We coexisted, in other words, quite oblivious of Herbert Spencer’s Darwinian thoughts on the survival of the fittest.

The planet’s indifference notwithstanding, middle class housewives in the areas he visited considered it, despite their limited resources, a God ordained responsibility to keep him going. And “keep on going” he did, from house to house, pouring out his toothless songs and collecting the one paisa donation to his one man show. The paisa I speak of dates back to pre-decimal coinage days and constituted a sixty-fourth part of a rupee. *

My mother too, as I recall, had a kitty, yet another tin can, which held her philanthropist’s collection of one paisa coins, reserved specifically for the tribe of street dwellers the old man appeared to belong to. And I had been taught to pick out a coin from her collection and hand it over to the man whenever he showed up, which, out of impatience, I often did before waiting for him to finish his singing.

He was a pathetic soul, which I could make out even at that tender age, but I don’t think I bothered much about the matter. Till the day arrived when the man proved that he could rise to the occasion when situations demanded.

Our next door neighbour had a son, Ratan, who was a year younger to me. Ratan was as acquainted with our man as I and was not surprised as he arrived one morning when the two of us were playing in their small garden. As I said, we were quite young at the time, but I wonder now, as I ruminate over this incident, what the cut off age is for boys migrating out of the world of pure innocence.

The songs the man sang mostly belonged to the category of folk music, laced with religion and a rustic brand of philosophy, for none of which young children like us had any use at all. Except for one song, which we were particularly fond of. There was a line in the song that said: I have arrived totally naked into the world and that’s the way I will have to leave it too! There is no point writing down the Bengali equivalent of the word “naked”, but I think the closest word in Hindi would be “nanga”. So, the song was telling us about the futility of accumulating worldly treasures, for “arrived we have on earth totally nanga and we have no choice but to leave it in an equally ‘nanga-fied’ state.” The philosophy embedded in these lines, however simple to absorb, made little impression on our minds. Instead, we were tickled pink to hear the word “nanga” being repeated several times in the song. And we wished to hear it over and over again. Possibly we felt sex in the air, quite instinctively I am sure, for no one had ever exposed us to anything remotely related to the birds and the bees.

Much to our dissatisfaction, however, the man did not sing the song of our choice on this particular morning. And as soon as he began, we knew that we won’t get to be treated the way we wished to. We quickly stopped him therefore and demanded that he sing that other song, the forbidden one as it were. The man’s fierce eyes turned somewhat angry as he listened to us.

But it was not really anger that had invaded his tranquillity. It was not his disappointment with the fact that his message concerning the senselessness of material possessions had failed to reach us that appeared to cause him annoyance. Quite the contrary in fact. We had completely misunderstood the expression on his face.

His face turned very grim as he said, “That song costs two paisas! I won’t sing it unless you give me two paisas.”

I was flabbergasted and began to protest. “Only yesterday, you sang that song in front of our gate and I gave you one paisa. Why do you want two today?”

The stoic philosopher remained quite unmoved though. “That song costs more nowadays,” he repeated.

I was too young I am afraid to argue out the case with him. Or else, I ought to have told him that he should sing it free, given its sermon. But I was no match for the “smart businessman” I was facing at the moment.

Neither Ratan nor I had that extra paisa. So we began to scratch our heads till a solution to the problem struck me. “How about my mother’s kitty? There should be more than a paisa in the tin box.” As soon as this thought struck me, I told Ratan that I might be able to steal a paisa from the home fund, if my mother was not in the vicinity. And Ratan of course readily agreed. It didn’t occur to either him or me that Ratan himself could play the same trick with his mother!

In any case, I ran back home and quietly stole that one paisa and came back to the venue of the musical performance. The old man was patiently waiting I found, as was Ratan. I was panting as I sat down on the steps leading to the garden. We sat side by side in our royal seats and the man then treated us to the song of our choice. And truth be told, he did entertain us sufficiently with his song, repeating the line we were dying to hear several times more than he usually did.

We giggled merrily each time the word came up. Who says markets don’t work? We paid more and he supplied us with the goodies.

Ratan unfortunately is no more, but his memory resides deep inside my heart. And whenever I remember Ratan, I feel guilty of cheating my innocent mother of her collection of paisas. And I cannot forget the old man’s amazing bargaining skill either.

Frankly, I will never be able to figure out who amongst the three of us cheated most.

2 responses to “A Two Penny Opera”